Version 3.8 is the first step in optimizing for the Pebble

Google Now on the Pebble

Location based weather on the Pebble: 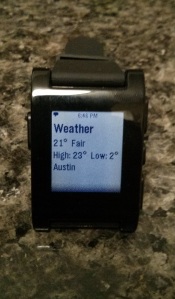 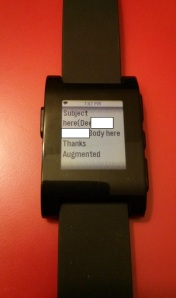 Phone Battery Status on the Pebble

User Reviews for Augmented SmartWatch Pro on the Pebble:

“I had to buy another app to get some of the other notifications to work. Augmented Smartwatch Pro”

“I tested the trial and then bought it. The official Pebble software will probably get better with time and moot the purchase, but it is worth $4 to have all of the extended notifications right now.”

“Just the app I needed. My Pebble came in the mail and I knew there wasn’t going to be third party notification support for Touchdown. Enter Augmented SmartWatch Pro. Instantly got what I wanted from the app. Any notification that hits the bar can be pushed to the watch. Random third party app? No problem. Google+ Messenger updates? Boom, on my wrist. Weather, Touchdown, sports updates”

“That app is awesome!” and “Looking around a bit more I found exactly what I wanted in an app called Augmented Smartwatch Pro.  I believe this app was initially developed for the Sony Smartwatch, but as noted on the developer’s site, it actually can handle quite a few watches with Pebble being the latest and getting some great attention. It’s well worth the few bucks to enhance the watch.”

“First off, I’m sure a lot of emails to you start off this way, great app. It fills the need I had for pushing various notifications to my Pebble.”

Interesting video @ DroidLife where they show how multiple notifications work. It is better than I thought in that a more recent notification will be displayed right away on the Pebble – thereby overwriting the notification in progress.

What this means is that (until/if Pebble does something about this), a client (3rd party app like Augmented SmartWatch Pro) could “pace”out the notifications instead thereby have a more pleasant user experience (similar to what the Augmented SmartWatch Pro app does with the Sony today)!  This will be in Version 3.7 and is available in the trial version.

Tasker Task example  – note in the latest version of Tasker it is called Send Intent (it was Action Intent in older versions of Tasker). Note also the “Target” must be set to Service: 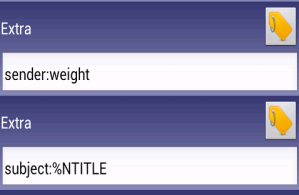 How to Setup Pebble Support in Augmented SmartWatch Pro:

Note the Pebble Android App/SDK will still have the following restrictions:

Note that Vibration settings do not affect the Pebble 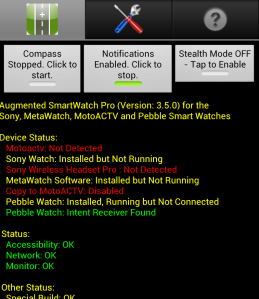 66 thoughts on “Progress of Augmented SmartWatch Pro and the Pebble”